The recording from Monday’s webinar is available below:

EVN is a current holding in our ASX100 model portfolio and the share price looks like it will retest the $4.550 price level.

We recommend investors begin building a long position in the stock.

WPL is a current holding in our ASX 100 model portfolio.

Recent production guidance suggests 2019 will likely deliver relatively flat production growth.  WPL trades with an implied oil price of around US$55, (versus current Brent Crude at $US74).

The overnight announcement from the Trump administration stating it will no longer grant sanctions waivers to any country that is currently importing Iranian oil, is helping to provide support across the energy sector.

Boral has been under Algo Engine sell conditions since late 2017. The stock made a new low last month following the company downgrading FY19 earnings.

Weather and project delays were cited as the main reasons for earnings  coming in below prior forecasts.

Based on expected FY20 earnings, we have Error with ischart shortcode. No symbol attribute defined.trading on 10x PE offering a 6% dividend yield.

Accumulating the stock throughout this year, will likely prove a long term  discounted entry level.

Woolworths Group is a current holding in our ASX 100 model portfolio, as well as the ASX 20 & 50 models.

The stock is up over 9% including dividends after being added at $28.50 back in August last year. With the share price trading at 24x forward earnings and only a 3% dividend yield, we consider it expensive.

We suggest selling a long dated European call option to enhance the income. For more detail on the strategy, please call our office on 1300 614 002.

CBA:ASX is under Algo Engine sell conditions, (as are all banks excluding Macquarie & ANZ), and we highlight the technical lower high pattern at $73.50.

CBA has announced they intend to suspend preparations for the demerger of wealth and mortgage broking business, with no time frame provided.  We feel this adds another layer of complexity with executing the business strategy to become a simpler, streamlined business.

We see reduced scope for Suncorp to reprice mortgages, given the
current political and regulatory climate, and we expect to see ongoing margin
pressure.

Stay on the short side and watch for the share price to trend lower with the 10 day average crossing below the 50 day average as a reference point.

Global markets are in the early stages of rolling over, as a combination of weaker data from China, Europe and the US weighs on investor confidence.

Data out of China showed its exports slumped 20.7 percent from a year earlier, far below analyst expectations and wiping out a surprise jump in January.

The European Central Bank slashed its growth forecasts for the euro zone and announced a new round of policy stimulus.

As readers will be aware, we’ve been tracking the XJO to break the 10 day moving average as a confirmation of the short-term indicators supporting the longer-term Algo Engine “sell” signal. If we apply the same analysis to the Dow Jones, we see a more advanced break in price action. 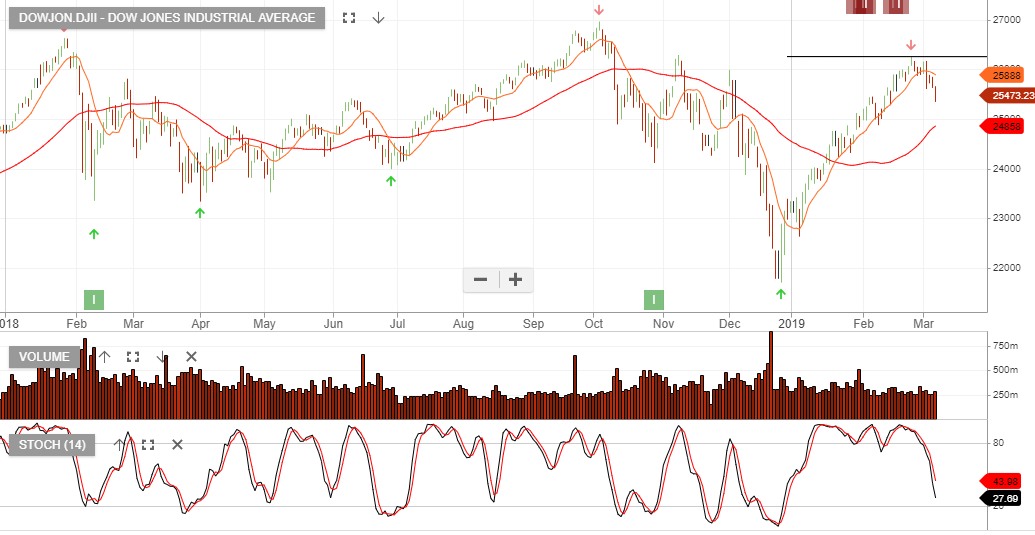 IPL is under Algo Engine buy conditions following the higher low formation at $3.20.

The stock price has been sold off following concerns around the impact of the Queensland floods. In particular, the short term closure of the Phosphate Hill plant and the impact to rail transport.

With the stock now trading 10x FY20 earnings we see much of the downside risks, already priced in.

CWN  remains under Algo buy conditions and with the stock trading on  a 5% forward yield and low single digit EPS growth, we continue to see value.