Coca-Cola Amatil is under Algo Engine buy conditions and is a current holding in our ASX 100 model portfolio.

We see value in buying CCL and selling $12.00 June call options to enhance the cash flow return. CCL goes ex-div $0.26 on the 26th of February.

Coca-Cola Amatil has hit our $10.75 price target and investors can look to lock-in the 7.5% profit or sell covered call options to enhance the cash flow return.

Coca-Cola Amatil is under Algo Engine buy conditions and is a current holding in our ASX 100 model portfolio.

Look for a move back towards $10.75 and then sell call options to enhance the income return. For more information on the derivative strategy, please call our office on 1300 614 002.

Coca-Cola Amatil is under Algo Engine sell conditions following the lower low and lower high price structure. The downtrend started back in 2013 when CCL traded as high as $15 and during investor capitulation in 2017, traded down to $7.50.

If we look at the valuation metrics on CCL and assume flat earnings per share growth over the next 12 months, we have CCL trading on a 5% dividend yield. We assume total revenue of $5bn producing EBITDA of $950mn.

The last positive volume growth period was after Coke Life was launched in 2015.  Indonesian volumes appear to be rebounding with growth of 10%+ in the March quarter, compared to the same time last year.

Buying CCL and selling a covered call option is a consideration for investors looking to generate 10%+ cash flow from a low risk opportunity, on a moderate PE of 15.5x earnings.

Coca Cola is under Algo Engine sell conditions and there was nothing in yesterday’s FY18 earnings release that would suggest a recovery is near. FY18 NPAT earnings fell 7% to $388.

We look for the CCL share price to remain weak and $7.50 is the next level of support based on a stable dividend outlook. 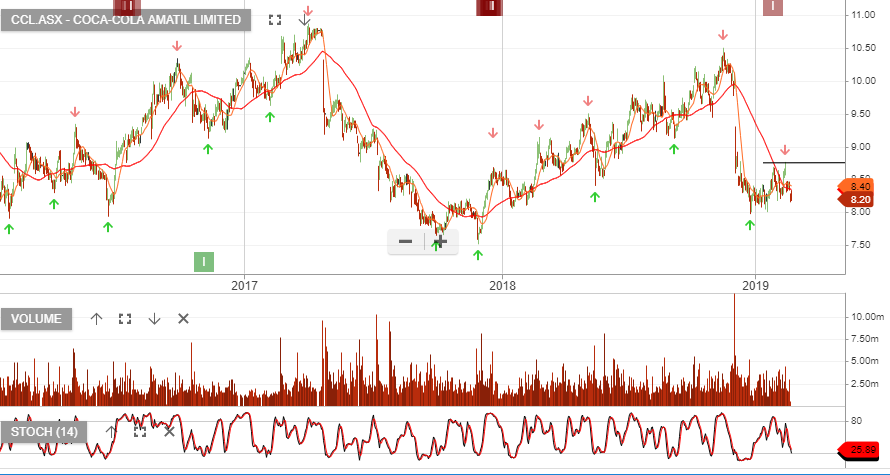 Coca Cola CCL is set to report earnings on the 21st of February. The stock is under Algo Engine sell conditions following a series of lower high formations,  during the past two years.

The most recent sell signal was in January at $8.75. If we assume flat EPS growth into FY19 we have CCL now trading on a 5% yield.

Weakness in the upcoming result may push the share price below the $8.00 level, at which time, we would look to run a buy write strategy.

Shares of CCL are down 4% to $8.60 in early trade as yesterday’s AGM offered little definitive forward guidance about growth and earnings.

Investors were looking for an update on operational margins not only in Australia but in the ventures in PNG, ANZ and Indonesia.

There was no change to the planned 21 cent dividend for August 28th, and we see initial support for CCL in the $8.50 area.

Our ALGO engine triggered a sell signal for CCL on December 15th at $8.60.

As illustrated in the chart below, the share price has formed a “triple top” formation at the $9.10 level over the last 8-weeks.

In their last report, CCL booked a 10% rise in earnings for its alcohol and coffee business, while the soft drink, juice and energy business fell 6.5%.

Investors trading on our SAXO Go platform can look to sell CCL with a stop order just above $9.20

Shares of CCL are up 3% in early trade as the company announced an 80% increase in net annual profit to $445.2 million.

Despite the underlying EBIT falling .7%, the share price has reached a 7-month high of $9.07.

In a blog post last Wednsday, we highlighted the bullish technical structure and that a break of the $8.45 level could point to an extention above $9.00.

Internal momentum indicators are now overbought and we suggest exiting long positions and looking to enter again at a lower level.

The company announced a dividend of 26 cents (70% franked) and goes ex-dividend on February 27th.

The first area of technical support for CCL will be at, or around, the $8.65 level.

Since posting an intra-day low of $7.52 on November 24th, shares of CCL have been carving out an ascending flag formation.

This is a bullish continuation pattern and is bounded by support at $8.05 and resistance at $8.65. A break of the $8.65 level would point to a measured move targeting the June highs near $9.40.

CCL is due to report earnings next Wednesday, the 21st.

In late November, the company advised that profits for the 12 months to December were expected to be $13 million higher than the consensus of $405 million.

CCL is scheduled to pay a 25 cent dividend on February 27th. At the current price, that pencils out to an annual yield of 5.5%.

Technically, an ASX close above $8.45 would suggest range extension to the $8.65 level.