Treasury Wine Estates is under Algo Engine sell conditions and we highlight the recent softness in US sales data as a concern.

Sales within Asia continue to offset the US related weakness, however, we expect the TWE share price to remain under pressure.

We’re not holding TWE in our portfolio at present and we prepared today’s post on TWE as a reminder of the opportunity that lies ahead when the stock switches to buy conditions. We expect to see this in the first quarter of the New Year.

Earnings continue to grow at 15 – 20%, although there is evidence that the growth rate is slowing.  If we assume total revenue in FY20 of $3bn on EBIT of $765mn, 15% earnings per share growth, we can support a 3% dividend yield.

On the above basis, we consider TWE fair value, but see little in the way of a catalyst to drive the share price higher. We therefore, recommend selling a covered call option to enhance the income return. 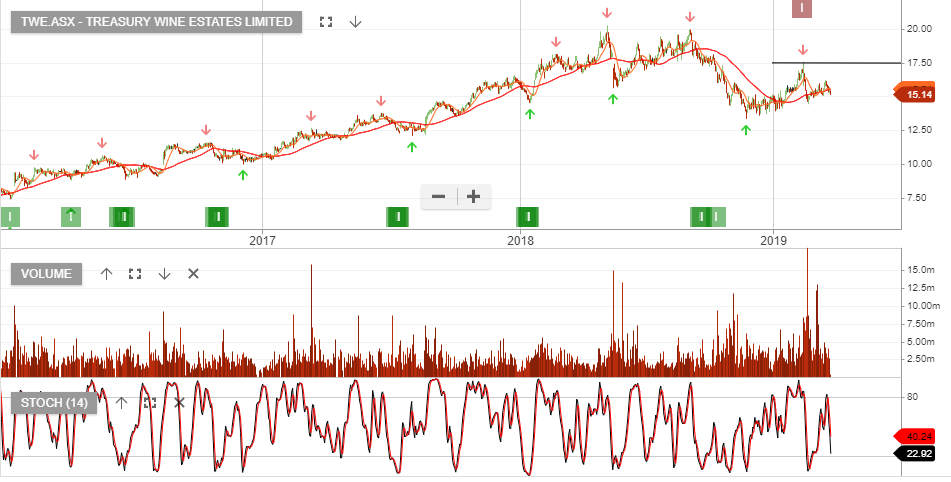 Earnings from American markets exceeded expectations, whilst Asia was slightly below the elevated guidance.

Overall the result looks okay with continued EPS growth in the 20 – 25% range.

We consider the 2019 recovery rally in the below names, as now largely complete.

The post below is from the 14th of November.

GARP is an acronym which is referenced to “growth at a reasonable price”.

This is how we now view ALL, TWE, CAR and SEK. 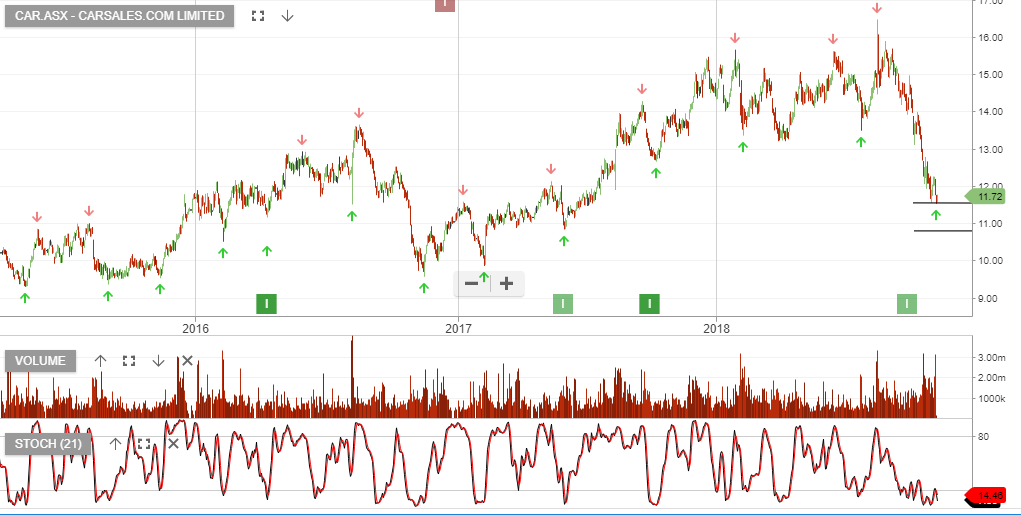 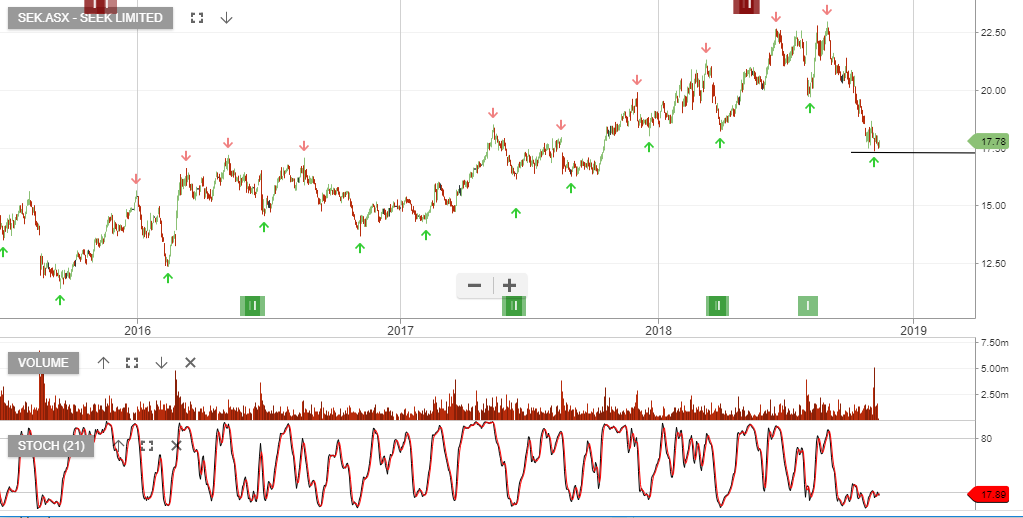 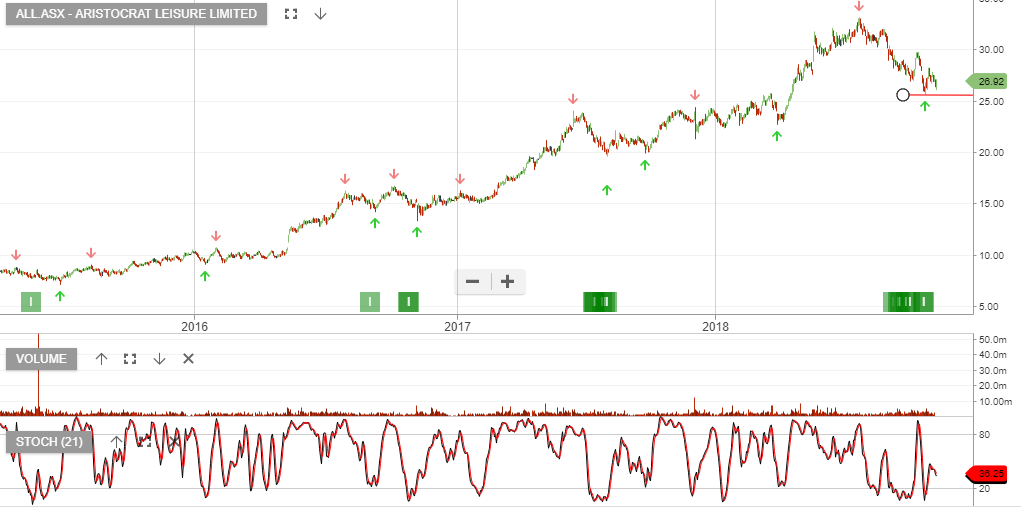 Shares of TWE have extended yesterday’s gains and are 3% higher at $14.70 in early trade today.

The catalyst for the sudden rally has been the Chinese government’s clarification of on-line sales regulations for offshore companies.

Prior to yesterday’s announcement, TWE and other online vendors were uncertain of the on-line sales protocol past December of this year.

So far this year, TWE has registered over $500 million in sales from the Asian region, led by sales to China, which make up over 20% of its total group sales.

CAR is one of the “GARP” (growth at a reasonable price), names that we’ve been tracking.

With the stock bouncing off the $11.00 price level, we suggest running a tight stop-loss below the recent “pivot low” and giving the upside momentum a chance to develop.

Within the back drop of market volatility, it is difficult to know how this trade plays out in the short-term. Therefore, we highlight the need to run a stop loss.

We consider ALL & TWE as similar technical opportunities. 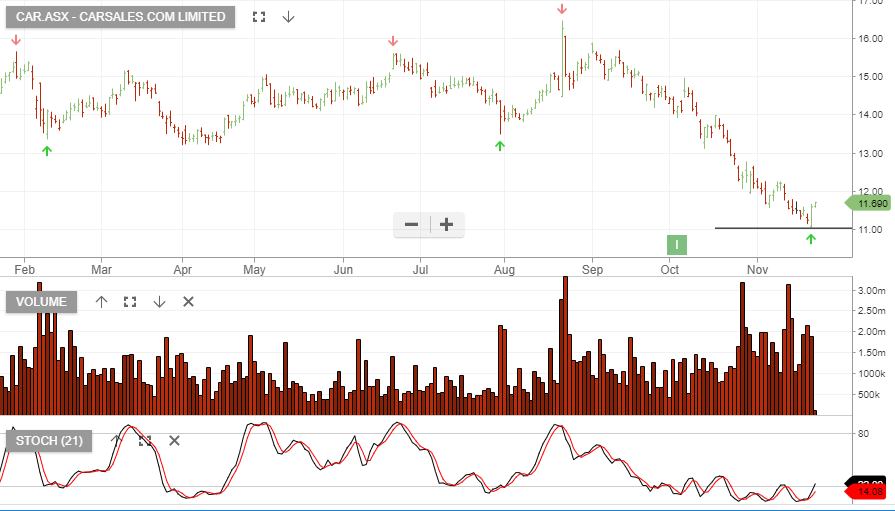 This selloff has come despite the fact that the company has maintained their guidance for EBITS growth of 25% going into 2019.

Technically, the momentum indicators have reached an oversold level last seen in January of this year, which preceded a 23% rally over the following 2 months. 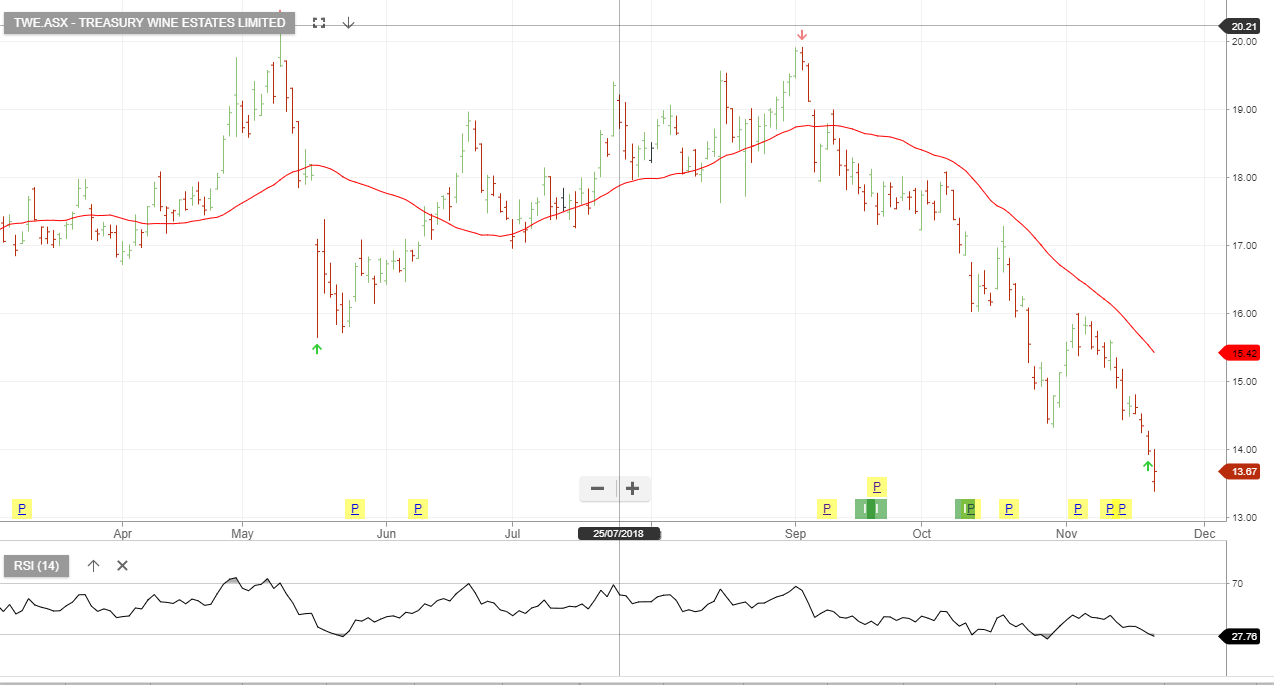 TWE, SEK and CAR are all displaying current Algo Engine buy signals and are  therefore a holdings within our ASX100 model portfolio.

Seek is another name where above average EPS growth is likely to be achieved in FY19 & FY20.  We recommend accumulating the stock within the $17 – $18 price range.

CAR delivered a disappointing earnings update earlier this month, however, with the stock price correcting 25%, we now see value emerging.

Over the last three years, ALL & TWE have been among the best performing stocks within the ASX100 model portfolio. 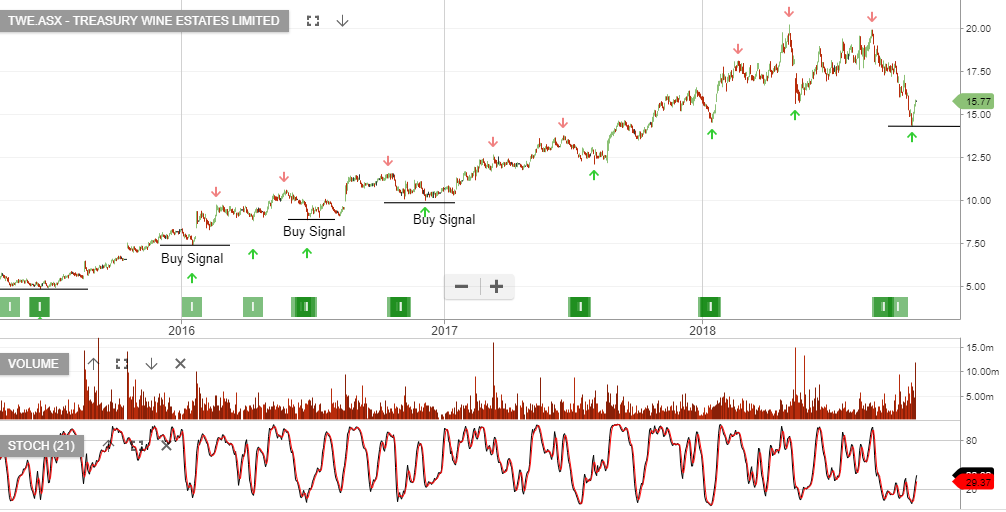 TWE held their AGM last Thursday which was co-located in Hong Kong and Melbourne.

Chief executive ­Michael Clarke said earnings for 2019 would be bolstered by its new distribution model in the US, which was gaining traction with industry players, and its ability to deliver more luxury wine to its consumers.

He also reiterated his guidance for 25% EBITS growth in 2019 and noted that 1Q results were in line with internal plans for every revenue location.

Despite this upbeat news, TWE share price has been unable to hold above $17.00.

We consider this more a transitory function of the overall re-balancing of the ASX 200 Index, than a specific valuation issue with TWE.

As such, we suggest accumulating shares at current levels with an initial upside target of $19.40 and then $21.60. 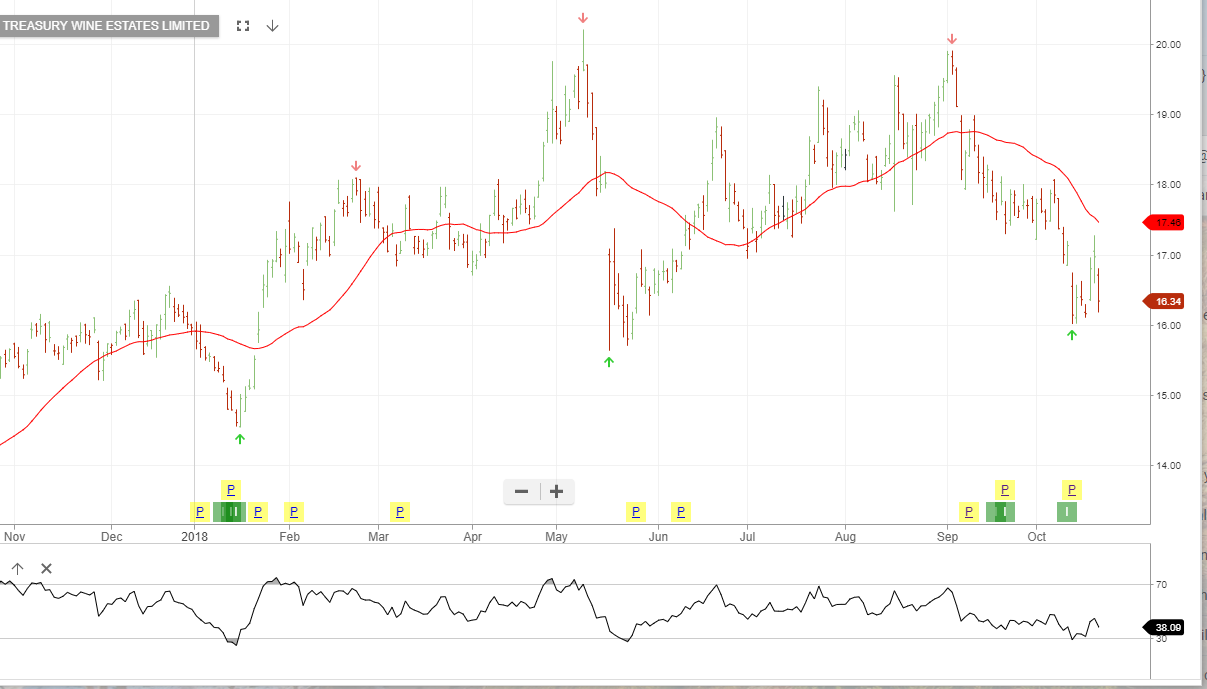